On June 30, 2003, Tanja Hook's mother reported her missing to the Lawton, Oklahoma P.D. On August 29, 2003, her remains were found in a bar ditch on May Avenue about 1/2 mile north of Highway 74-B in McClain County, Oklahoma. At the time, Hook was living with a boyfriend in the Cache Road district in Lawton where five prostitutes disappeared between 2002 and 2004, along with a number of others across several states on the Interstate 40 corridor. The victim lived in that vicinity, and it is possible that she fell into the same category with those other females.
Race:
White
Gender:
Female
Card Image: 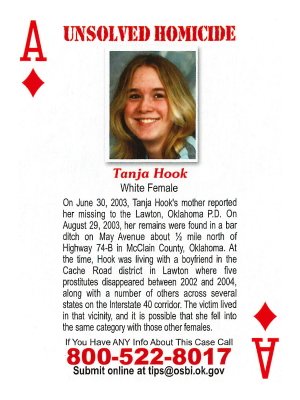