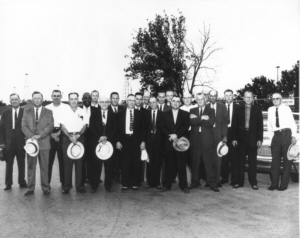 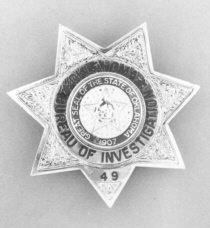 1960 - On January 31, OSBI Director Forrest Castle admonishes his agents to enforce the vice laws impartially after rumors of payoffs among law enforcement officers. The Director advises agents to work in pairs to avoid setups. Subsequently, a change in crime bureau policy allows state agents to make vice raids without being requested by county officials.

1961 - The OSBI, with only 16 agents, recovers property valued at $376,119 and receives 2,191 calls for assistance from other agencies. The agents work for $450 a month. Director Ralph Venamon requests their salaries be raised to $500 per month.

1961 - Six agents are fired as the result of new state legislation which requires the Bureau to consist of only a director, assistant director, and ten agents.

1962 - Six Brand Rangers of the Board of Agriculture are commissioned by the OSBI.

1963 - Employees of the bureau are removed from the merit system and now work at the will of the governor. Director Ralph Venamon and Assistant Director Vernon Glenn demote themselves to agents to avoid being terminated from their employment with the agency. Venamon takes a 50% pay cut

1963 - The Regulated Drug Enforcement Division of the State Attorney General's Office is transferred to the OSBI.

1963 - Eight agents, under the leadership of Fred Graves, investigate the murder of a sheriff's deputy near the town of Dogpatch. The deputy was gunned down in an ambush, and because Dogpatch was gripped by fear of lawlessness, citizens were reluctant to cooperate with local officials. As a result, the Bureau was called in. After the conviction of the man responsible for the deputy's murder, Graves tells newspaper reporters, "We wanted the people to know there was law and order, and there was going to be law and order even when we left."

1966 - Four OSBI agents resign and others are looking for jobs because of a lack of job security.

1966 - Governor Bellmon publicly recognizes that the "gambling games" occurring at the Oklahoma State Penitentiary, and controlled by the warden, have been stopped due to an OSBI investigation.

1968 - Governor Bartlett directs that the National Crime Information Center (NCIC) terminal for the state be installed at OSBI Headquarters.

1968 - All Bureau employees are placed under the merit system.

1969 - Ruth Schier, the first woman to appear on the FBI's Ten Most Wanted List, is arrested in Norman, Oklahoma after fingerprint experts at the OSBI positively identify her as a recent job applicant at Central State Hospital.