The OSBI Latent Evidence Unit (LEU) is a section of the OSBI Criminalistics Division housed in the Forensic Science Center in Edmond, Oklahoma.

Services provided by the LEU latent print examiners include:

A few of the tools utilized in accomplishing these tasks include the Automated Fingerprint Identification System (AFIS), the Federal Bureau of Investigation Next Generation Identification (NGI), digital imaging equipment, and various chemical and physical development techniques.

All criminalists at the OSBI Forensic Science Center are tasked with the responsibility of providing quality forensic science services in a timely manner to the criminal justice community.

The goal of all criminalists involved in impression evidence development/comparison is to provide the most accurate and timely analyses possible.

On the palmar and plantar portions of the hands and feet, each person has a unique and permanent (barring scarring or injury) arrangement of ridges and furrows, called friction ridge skin. You can think of this skin like the rubber portion of a stamp. 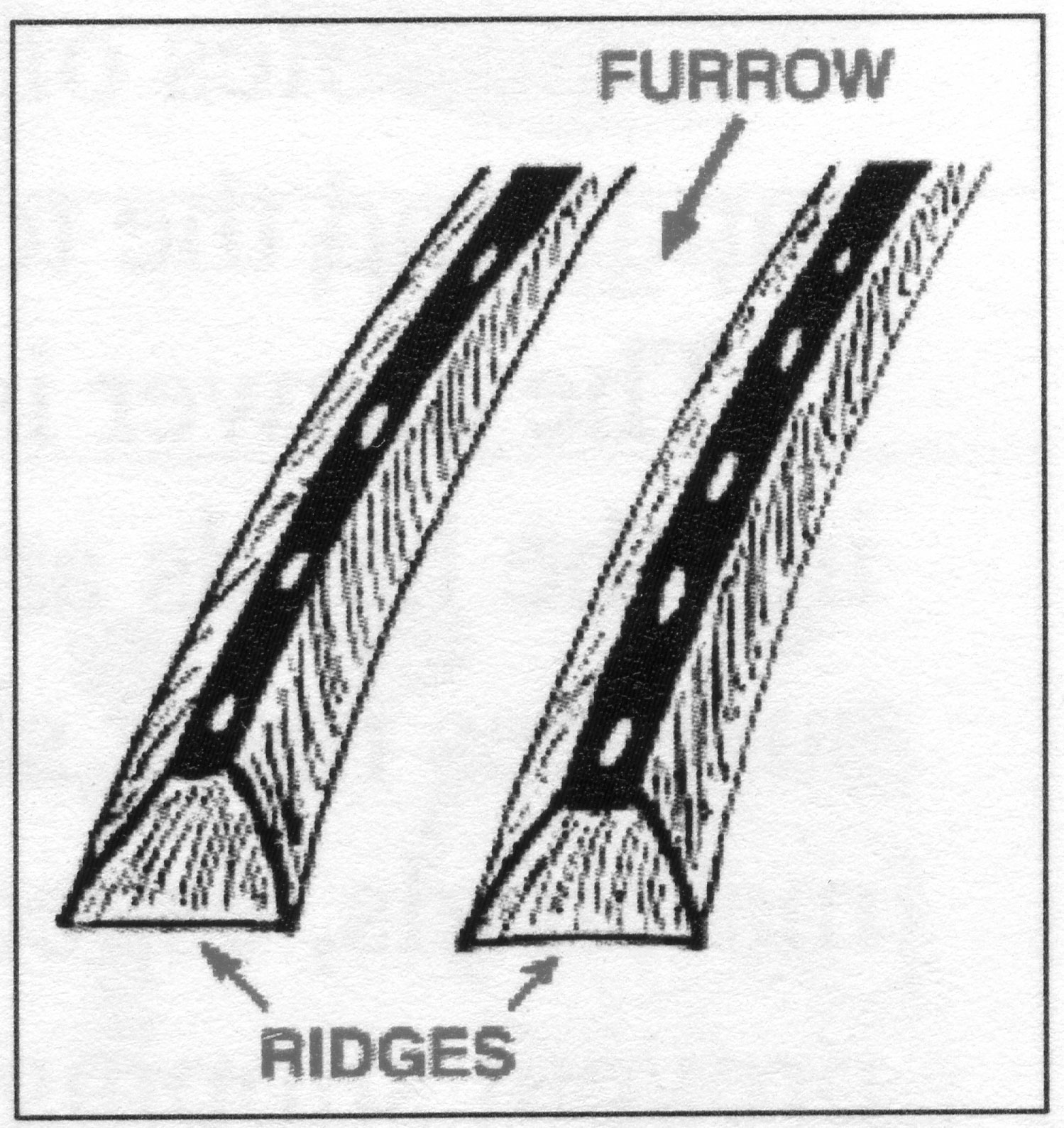 The term "latent" means "hidden".  Latent prints are most commonly fingerprints or palm prints that are collected from a crime scene.  Latent prints usually need to be processed or developed with a chemical or physical developer in order to be visible to the naked eye.

Latent prints can be left by simply touching an object in a crime scene.  The ridges of the hands and feet are composed of sweat pores, but other portions of the body, such as the face, are composed of a variety of glands and pores, including oil glands.  Because of this, the ridges of the hands accumulate sweat as well as oil, and these can be easily transferred quite routinely.  Anything that accumulates on the ridges of the finger can be transferred and left behind in the same formation as the fingerprint ridges.

To use the stamp analogy once more, think of your finger as the stamp and any accumulated substances (sweat, oils, and various other substances) that it acquires as the "ink".  When a stamp is placed on a surface, the ink is left behind in whatever pattern the stamp holds.  Similarly, when a person places his/her hand on a surface, any accumulated substances will be left behind in the pattern of the ridges. 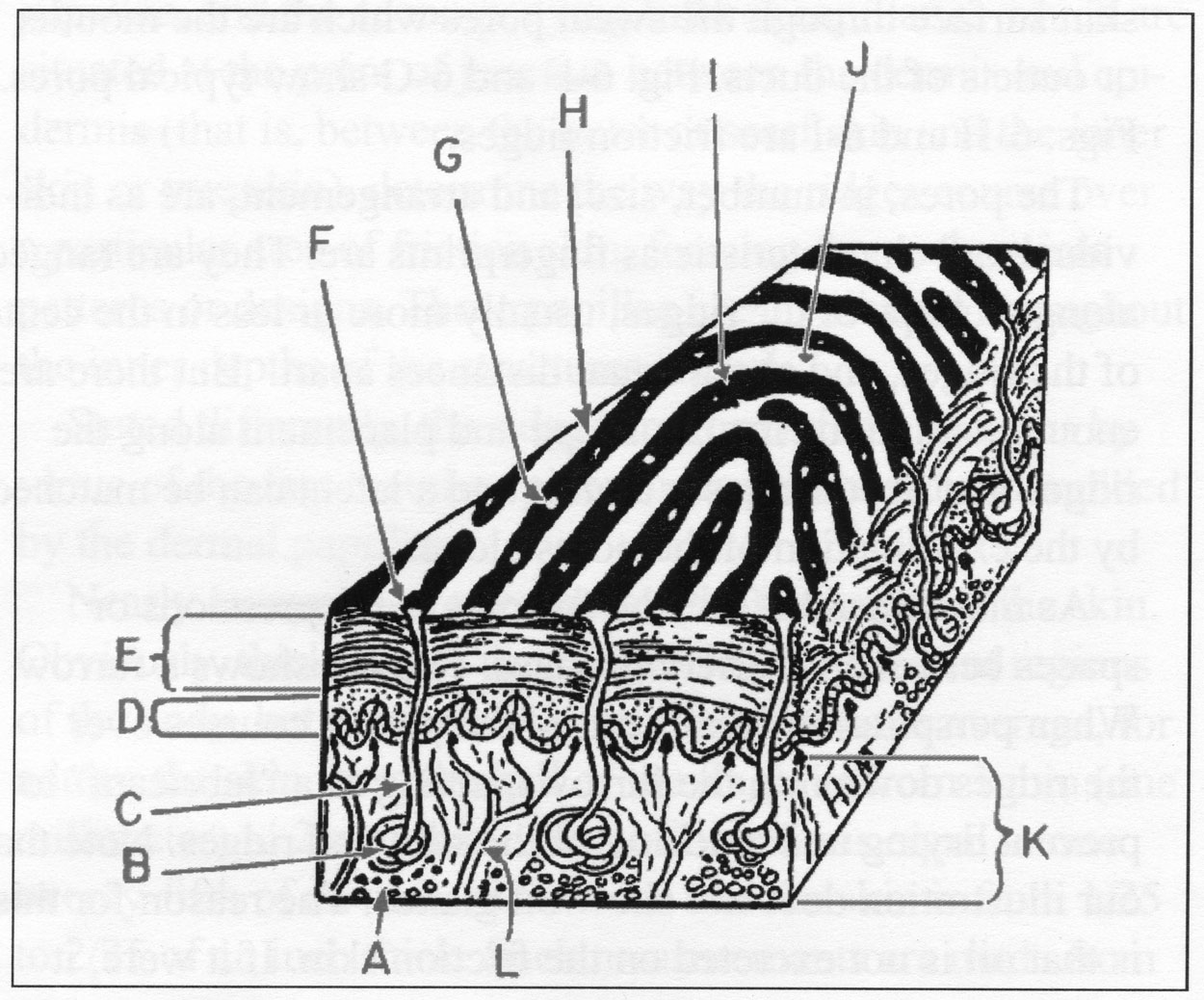 Some examples of latent prints that have been processed with a few of these techniques are pictured below. 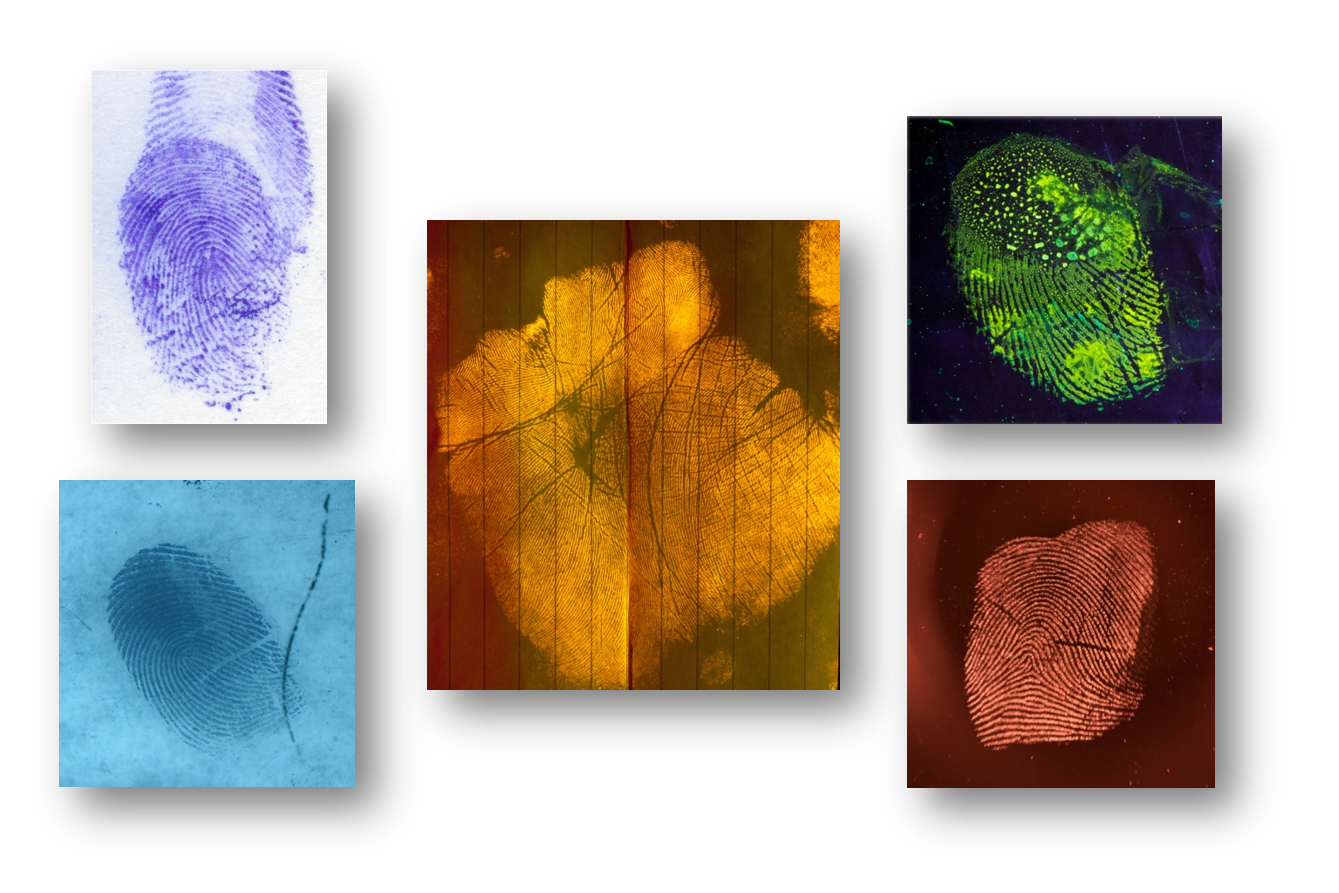 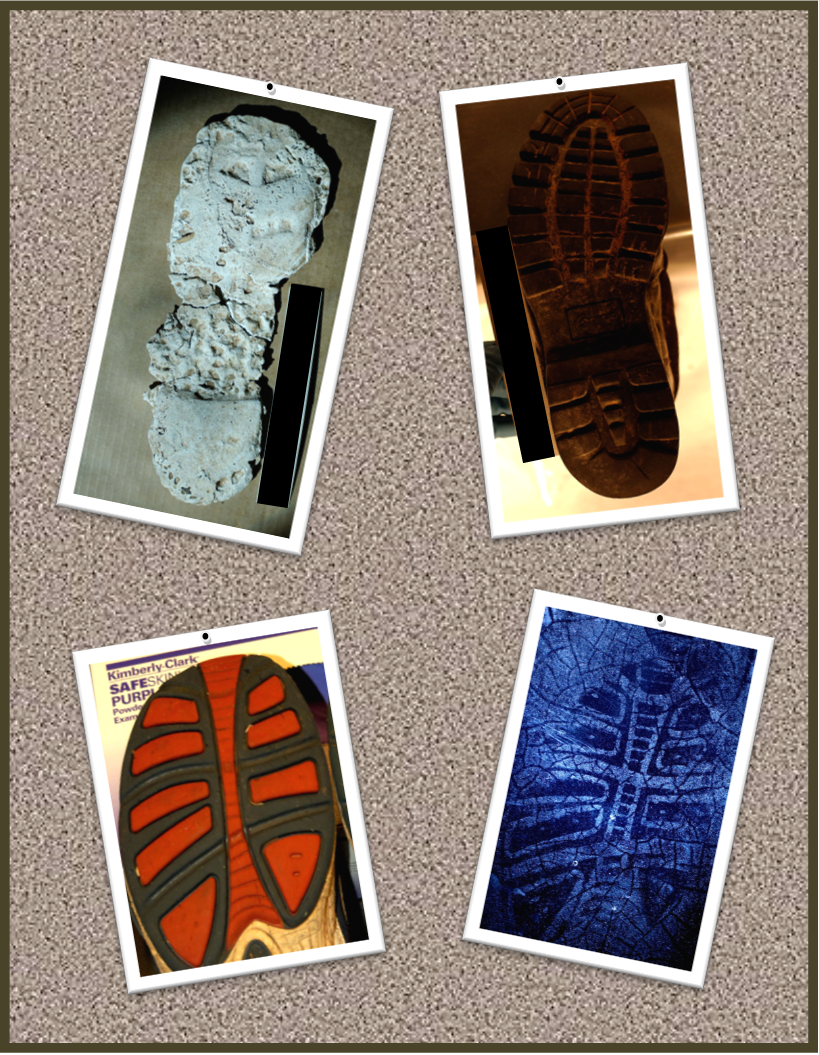 2-D impressions will be any impression that only has length and width measurements.

2-D footwear impressions are typically found indoors and are associated with objects touched at the crime scene.  This can include any object or surface in the crime scene.

An example of this could be a perpetrator who steps on some loose papers that are on the floor of the crime scene and leave a dirt impression on the paper. 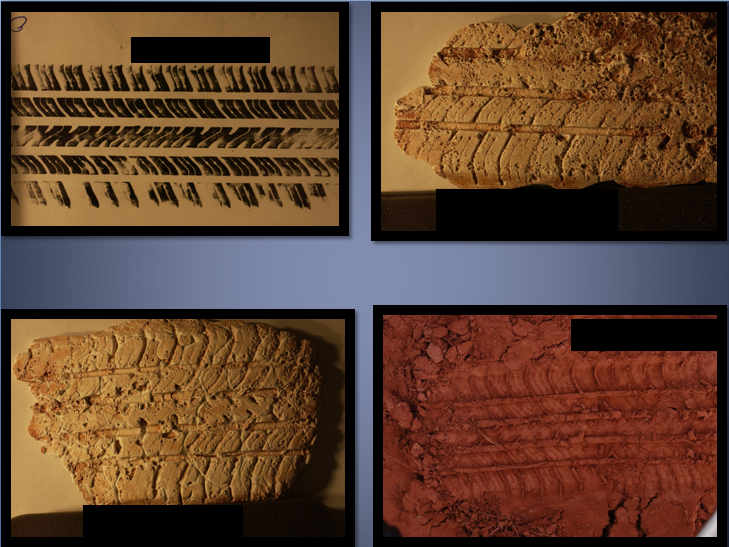 3-D impressions will have length, width, and depth measurements.

3-D footwear impressions are typically located outdoors in substrates such as sand, clay, mud, or snow, but can be found in any similar substrate that is malleable.

An example of this could be a perpetrator stepping in the mud right outside of a crime scene, and a footwear impression of his shoe/boot.

2-D impressions are normally photographed at a 90-degree angle with a scale.  For certain 2-D impressions, an electrostatic dust collector can be utilized.

3-D impressions are photographed in the same way, but a casting material can also be used to "lift" the impression and retain impression details.

What is a cold case?

The National Institute of Justice currently defines a cold case as any case whose probative investigative leads have been exhausted.

Who are unidentified persons?

NamUs currently defines unidentified persons as people who have died and whose bodies have not been identified.

Who are missing persons?

Missing persons are individuals who are missing and, therefore, cannot be determined alive or dead.

The FBI states that their Missing Person File contains records for missing persons who:

have a proven physical or mental disability

The FBI NGI database (formerly IAFIS) was updated and improved in May 2013.  Part of this update involved making palm prints, joints, and civilian prints available for latent print searches.

In order to determine what cold cases were applicable for re-searching, the LEU began reviewing, cases to determine in each case:

LEU also contacted agencies to determine if any cold cases had been resolved in-house.

Note: Only authorized state agency personnel have access to NGI.

Please, contact us if you have a cold case that you would like searched through the updated FBI NGI system. 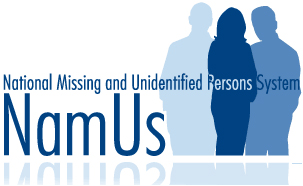 The National Institute of Justice's National Missing and Unidentified Persons System (NamUs) is a national centralized repository and resource center for missing persons and unidentified decedent records. NamUs is a free online system that can be searched by medical examiners, coroners, law enforcement officials and the general public from all over the country in hopes of resolving these cases**.

LEU began utilizing NamUs in 2014 after a successful corroboration with the Oklahoma Office of the Chief Medical Examiner  (OCME) on an unidentified person case related to a 1978 homicide case.

The case involved an unidentified female that was found in 1978, and was fingerprinted at the time, but a search through fingerprint records at that time yielded no identifications.

In 1982, the body was exhumed and photographs of the fingers were taken, and again searched through OSBI records with no identification made.

In 2011, the OSBI Forensic Biology Unit began working this cold case and were collaborating with an OCME anthropologist.

In 2014, the OCME anthropologist contacted the LEU in order to request the fingerprints of the unidentified person/victim be uploaded to The National Missing and Unidentified Persons System (NamUs).  At that time, the LEU pulled the cold case and ran the prints through the new, updated FBI NGI and were able to make an identification to the unidentified person.

Oklahoma Division of the International Association for Identification